The following information about methane (CH4) is presented to facilitate visualization and understanding of the methane  greenhouse potential.

This paper discusses how Arctic soil bacteria consume methane, and increase their activity levels in a warmer climate

“The figure below shows the column-averaged mixing ratio of methane in parts per billion (ppb). For example, 1730 ppb means that one billion air molecules contain 1730 methane molecules. As can be seen, methane is somewhat higher over the northern hemisphere where most of the methane sources are located. These sources are, for example, wetlands, rice fields, gas and oil production, coal mining and ruminants (e.g., cattle and sheeps). Shown in red are major source regions such as China, India, Siberia and parts of the tropics. Methane varies strongly with the season as shown in the maps on the right. The bottom figure (red curve) shows that methane started rising at around 2007 after several years of stability. The reason for this is not yet fully understood. As can also be seen, the amount of methane varies significantly within each year, e.g., with the season.---” 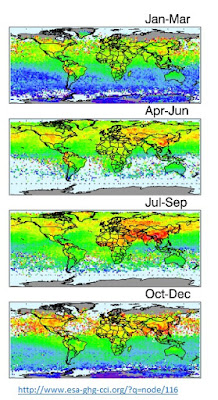 Figure 1. SCIAMACHY on Envisat
methane concentrations for 2002 to 2011.

The data shows high methane concentration in the northern hemisphere from July to September. 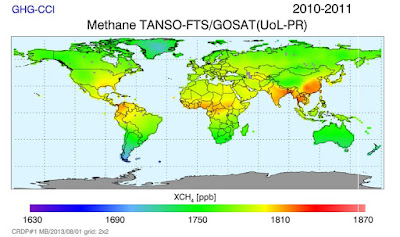 The high methane concentration areas seem to be located over two main types of regions: a. Rice growing b.  Coal mining  and c. Oil and gas producing.

I suspect there are other major sources, such as burning forests, and cattle. But I can´t find anything solid to confirm my suspicions.

I´m very familiar with the fossil fuels industry, and can confirm that China, India, Russia, Colombia and the USA are major coal producers  (except for the USA, these are shown in the orange/red areas in the map) .

But the seasonal link seems to point to rice as leading methane emissions contributor. The following map shows the major rice growing areas 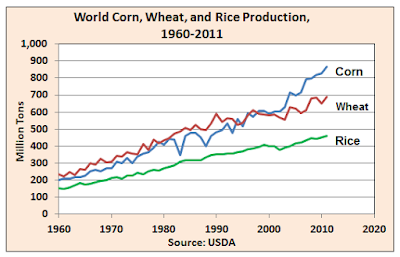 And finally, the methane concentration over the last 30 years: 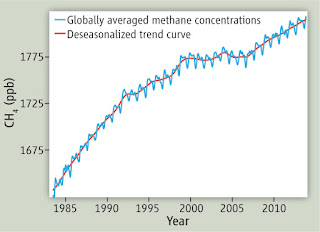 
Where do we go from here? I think, but I´m not sure, the main incremental methane emissions are caused by the oil and gas industry vents and leaks, coal mines, rice… and maybe burning forests, and cattle. I don´t have sufficient information to rank them, but I´ll keep searching the literature to see if I find something I think is reasonable.

If my hunch is right, there´s a need to regulate methane emissions by the oil and gas industry, coal mines, AND rice growers. I think the first two can be done by changing the equipment and techniques used to extract these fossil fuels (until they run out anyway). Rice growing, however, is a bit harder to control because people like to eat rice. So the answer may be to change the rice varieties to grow rice that emits less methane, or to change the way rice is grown. And that´s one hell of a tall order.

The “methane bomb” hypothesis is hard to pin down. I´ve read a few arguments about the influx (or formation) of warm water in the ocean in the Chukchi and Laptev Seas. So I´m adding a few links for the reader to understand a bit better the physical setting. 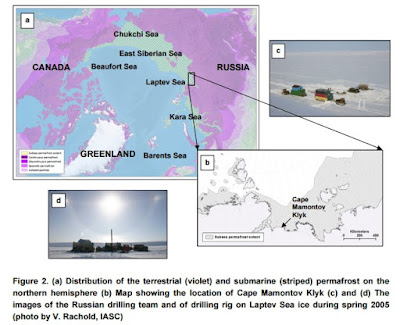 Note the Laptev Sea is tucked north of Siberia, it´s one of the remotest and coldest places in the world. I chose it because I´ve read quite a bit about (it may have oil and gas) and because I found a very interesting paper, which is linked and discussed below:

In this paper we present new data from ship-based measurements and two-year observations from moorings in the Laptev Sea along with Russian historical data. The observations from the Laptev Sea in 2007 indicate that the bottom water temperatures on the mid-shelf increased by more than 3 (deg) C compared to the long-term mean as a consequence of the unusually high summertime surface water temperatures. Such a distinct increase in near-bottom temperatures has not been observed before. Remnants of the relatively warm bottom water occupied the mid-shelf from September 2007 until April 2008. Strong polynya activity during March to May 2007 caused more summertime open water and therefore warmer sea surface temperatures in the Laptev Sea. During the ice-free period in August and September 2007, the prevailing cyclonic atmospheric circulation deflected the freshwater plume of the River Lena to the east, which increased the salinity on the mid-shelf north of the Lena Delta. The resulting weaker density stratification allowed more vertical mixing of the water column during storms in late September and early October, leading to the observed warming of the near-bottom layer in the still ice-free Laptev Sea. In summer and autumn 2008, when the density stratification was stronger and sea surface temperatures were close to the long-term mean, no near-bottom water warming was observed. Warmer water temperatures near the seabed may also impact the stability of the shelf's submarine permafrost.

From the Paper text:

These observations indicate that in 2007 the bottom water temperatures on the mid-shelf of the Laptev Sea increased by more than 3 (deg) C compared to the long-term mean. The temperature increase was accompanied by a distinct freshening of the bottom waters. The analysis of the time series revealed that remnants of this relatively warm and fresh bottom water mass survived the following winter and were traceable until the spring (April) 2008. This phenomenon may have far-reaching consequences. Most of the Laptev Sea and adjacent land remained unglaciated during the last glacial maximum, allowing permafrost to develop to depths as great as 1000 m before the (originally terrestrial) permafrost was flooded during the Holocene transgression. An increase in bottom water temperatures may affect the stability of the upper boundary of the (now submarine) permafrost that extends across large parts of the Laptev Sea Shelf at a shallow sediment depth (Kassens et al. 2007; Overduin et al. 2007).

Now  let´s look at Figure 6 whch shows the temperature profile for the wind field (top graph) and the two moorings (KH middle, and AN bottom). The AN mooring plot shows the unusual temperature excursion. 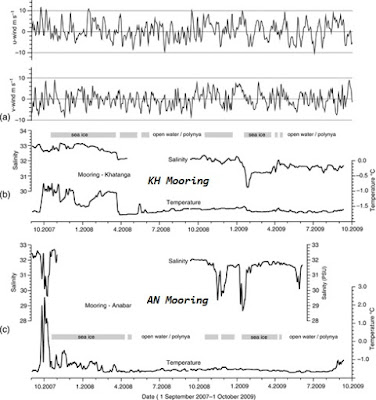 Fig. 6. (a) Zonal (u) and meridional (v) components of the surface wind
field at 75 deg N and 125 deg E (three-day running mean based
on reanalysis data) and (b) two-year time series (six-day running mean)
of near-bottom salinity and temperature from mooring KH
(at 38-m water depth) and (c) mooring AN (29-m water depth until
September 2008, afterwards at 27-m water depth).

The following text is copied from Katherine Feige´s thesis. It describes the nature of two shallow cores taken by an expedition, which she used for her thesis work.

C1 (terrestrial permafrost) was drilled on the mainland at a distance of approximately 100 m from the coastline and obtained a depth of approximately 60 m. The sediments consist of completely frozen and terrestrial material. It contains loam (soil containing sand, silt, and clay) and layers of dark gray autochthonous peat at depths between 0.3 m - 0.7 m, ice wedges down to 20.7 m, and fine sand (mostly dark gray) with varying organic content at depths between 20.7 – 60.8 m (Overduin et al., 2007). After drilling, the borehole temperature was measured using calibrated thermistors (MMT-4). The borehole temperature ranged between -18°C and -12.4°C (Junker et al., 2008).

At 11.5 km from the coast core C2 (submarine permafrost) was drilled from the sea ice (1.35 m thick) in water of 6 m depth through submarine and terrestrial deposits and reached a depth of approximately 77 m.

As we can see, the near surface sediments located onshore are frozen, except for a shallow layer which thaws in the summer, and which will increase in thickness by as much as 2 meters as the world warms in the future. The near surface sediments offshore are mixed, the seafloor is unfrozen sand, silt, and mud. As we move deeper there are frozen sections. These are the relics from the time when the shelf north of Siberia was exposed to extremely low air temperatures during the glacial periods. Today, they are under water and the frozen layers are melting slowly.

Feige´s thesis doesn´t discuss this, but I have seen data showing frozen sediments about 900 meters thick (this data was taken from oil and gas wells drilled by the Soviets, and later by the Russians, sometimes with foreign company assistance and financing). 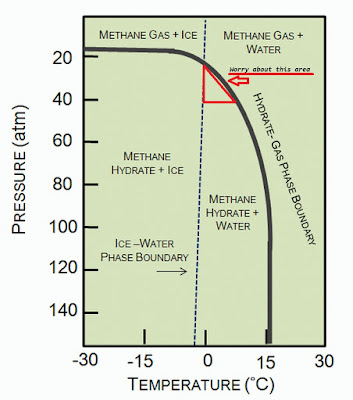 Methane hydrate phase envelope (from Stanford University)
I highlighted in red the region I consider to be most worrying,
deep water located in the Arctic around Svalbard.

The phase envelope shows the region (or area of the graph) we have to worry about lies between 22 and 40 atmospheres, because that´s the potential range of sea floor temperatures we may see as the world warms.

An atmosphere is 14.7 psi, and sea water has a pressure gradient of 0,485 psi per foot (I´m rounding off). Thus 22 atmospheres is 323 psi, the pressure at 667 feet, or roughly 200 meters. In other words, there´s no reason to worry about methane hydrates in water depths shallower than 200 meters.

It  takes a lot to warm up water below 200 meters (plus it takes a lot of time for the energy from warmer water to impact a significant amount of methane hydrate, which happens to be mixed in with sand, silt, sea floor carbonate debris, and sea water). But it´s definitely feasible to have higher methane emissions from melting hydrates in the Barents Sea (north of Norway and the Russian Arctic, waters around Svalbard archipielago). I assume other deep water areas around the world where water is warming up may release more methane as the hydrates melt.

However, the methane released from hydrates located near the sea floor is biodegradable. A significant fraction of the methane released is dissolved in the water (methane is very soluble in cold water at high pressure), and bacteria munch on it, releasing CO2 (which isn´t really that big a deal compared to the CO2 released by coal plants). The fact that methane releases aren´t reaching the surface such as to alter the atmospheric methane concentration is shown in the figures above (the ENVISAT and GOSAT maps).

In conclusion, based on what I see thus far, what we do need to worry about is increased bacterial activity as the onshore permafrost melts and the bacteria start eating dead material found in the 1 to 2 meter thick layers we know ought to melt in the summer as the world warms. Lucky for us, some of this bacterial activity is offset by new vegetation which grows in the boundary between the tundra (the terrain which freezes in the winter and thaws in the summer) and the taiga (the Siberian forest, which will move north and store a huge amount of carbon as the world warms).