By now 98% of Venezuelans heard of Guaidó.
How do you “know Guaidó is the right man”? You don’t. What you need to know is that Guaidó was elected president of the National Assembly by a large majority of its deputies on January 10, 2019. The Venezuelan constitution requires the Assembly meet and vote one president, two vicepresidents and two secretaries, therefore the vote was required.
Guaidó got the Assembly to vote for him because the four largest democratic political parties made an agreement in 2015 which led to a deputy from Voluntad Popular being proposed, and voted almost unanimously (54 socialist deputies backing Maduro walked out, one socialist deputy is abroad and actively opposing Maduro). 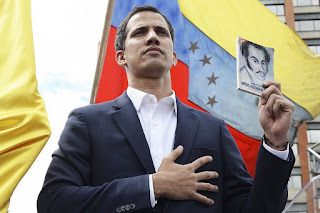 President Juan Guaidó
Maduro’s presidential term expired Jan 10, he’s the expresident. He claims the right to continue with another term because he organized rigged elections on May 20 last year (his popularity was dropping so fast he had the election held months ahead of time in a futile attempt to get more backing). These pseudoelecciones were boycotted by the large democratic parties, so he propped up two fake opposition candidates which of course “lost”.
These elections were denounced as illegitimate by the EU and the OAS, so in a sense they marked Maduro as a tyrant who was executing a self coup.
Most nations don’t really care when a government goes rogue like this, but Maduro also caused a huge humanitarian crisis driving millions of Venezuelans to leave, and they are straining resources in neighboring countries. Plus the human rights abuses are gross. So over the last six months a consensus evolved in countries such as Colombia, Ecuador, Peru, Chile and Brasil that Maduro had to go, he was causing them problems and the current flood of refugees wasn’t slowing down.
The USA has been very careful to follow behind these nations, and didn’t take a more proactive stance until it was told they would back USA moves.
The Europeans are more like the US left, taking the low moral ground and doing what they can to help Maduro survive. But I don’t think they count for much at this point.
So you see, Maduro isn’t “retiring”, he’s an expresident who has evolved into a tyrant, and will probably be forced out of office by brute force if he doesn’t flee to Cuba. I am pressing to have this resolved as quickly and peacefully as possible, but I wrote that Guaidó should get backing to create a new police force with 20 thousand volunteers, a move which will put a lot of pressure on Raul Castro to remove his military from Venezuela because it would be a diplomatic disaster for him if we start capturing Cuban prisoners and putting them on YouTube
No hay comentarios:
Enviar por correo electrónicoEscribe un blogCompartir con TwitterCompartir con FacebookCompartir en Pinterest
Entradas más recientes Entradas antiguas Página principal
Suscribirse a: Entradas (Atom)