This page is written to document the differences between the IPCC´s AR5 RCP8.5 Pathway (the one that´s called “Business as Usual” in IPCC propaganda and most media), and my estimate of emissions and CO2 concentration, which I documented partially in a post called “Burn Baby Bun" written in 2014. 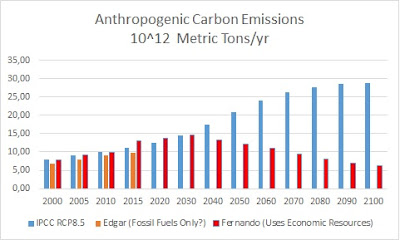 There´s a slight difference between the emissions shown in this graph and the one in my referenced post: I added the cement manufacture and other inferred from the difference between the EDGAR data base and the CMIP data, and extrapolated from 2015 at a constant value (1.33 Billion metric tonnes, where billion is the European convention, or 10 to the 12th).

As we can observe in the graph, my estimate and RCP8.5 are both above the EDGAR actual value in 2015. It´s possible that EDGAR´s report only includes emissions from fossil fuel use, and it´s missing the other anthropogenic factors (the EDGAR report writing style could use some improvements).

Both RCP8.5 and my estimate climb over time (which may be an erroneous assumption given that CO2 emissions appear to have stabilized). However, by 2040 they show a large difference, because the IPCC team assumed the amount of fossil fuels resources was essentially endless, and that alternative technologies wouldn´t have much of an impact (this of course renders RCP8.5 less than worthless as a “Business as Usual Case”). On the other hand, I prepared a model which cut back on fossil fuel use because its price was increasing and this discouraged demand (it assumes something else intrudes in the market to replace fossil fuels as they become less competitive).

The following graph shows the CO2 concentration difference between the RCP8.5 and my estimate: 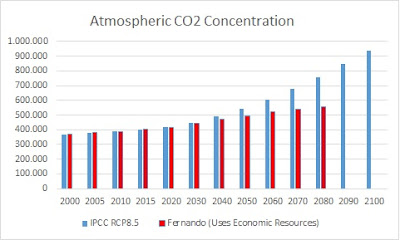 The key differences between the two are the emissions volume, and the carbon sink efficiency. RCP8.5 has a huge emissions increase, which in turn increases atmospheric concentration to very high values. The CO2 concentration extreme causes a large temperature increase, and the overall effect  of the two exaggerated values reduces the carbon sink ability to sequester CO2. This of course causes a larger increase in CO2 concentration as a function of emissions.
Read more ......>>>>>>
No hay comentarios:
Enviar por correo electrónicoEscribe un blogCompartir con TwitterCompartir con FacebookCompartir en Pinterest

The 2017 oil market seems to be coming down to a battle between US shale developers and OPEC plus Russia. In this post I will ramble on about what I can see from 30,000 feet, without getting into a lot of technical details. The only conclusion I can reach is that oil prices are likely to oscillate around $63 per barrel for a while (say three years) and eventually will begin to climb towards a $75 to $100 per barrel range in the 2020´s. 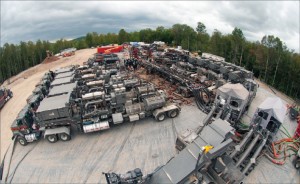 Hydraulic fracturing a well in Texas

To understand what´s going on, it´s useful to understand the so called US “shales”. These rocks aren´t really shales. They are very low quality rocks, a mixture of shale with carbonates and sometimes silts and very fine grained sands.

The quality of these rocks is so poor they weren´t produced much until the oil industry fine tuned a combination of horizontal wellbores which are fractured numerous times using sand, water, and a few chemicals (the “poisonous chemicals” the antifracking lobby likes to whine about, which happens to be quite irrelevant given that fracturing takes place thousands of feet below the surface and the fluids are pumped through very high strength concentric steel pipes). If you want to read a bit more about fracturing, go here:  Drilling Contractor Magazine describes greener fracturing .So... from now on, let´s call these “shales” even though we know they aren´t real shales, to makes things easier for the audience.

Anyway, the existence of the shales was well known for decades, but they were barely produced because they were lousy and we didn´t know how to drill horizontal wells and fracture the hell out of the rocks. Nowadays the oil industry doesn´t have much oil left to produce in conventional fields, which means there´s a lot of focus on the shales, which in turn means the tools and water and sand mixtures have improved a lot. And this means each horizontal well gets to produce enough oil to justify the investment (which ranges between say $4 million and $7 million per well)….if the oil price is high enough to cover the costs and allow for some profits.

The USA seems to have three world class shale rock regions, two in Texas (the Eagle Ford and the “Permian”, which for the most part means the Spraberry/Wolfcamp), and one in North Dakota (the Bakken/Three Forks).

I prepared a diagram to lay out the Castrochavism organization as it has evolved in the first two decades of the 21st century. The diagram became more and more complex as I sketched it with powerpoint, and eventually I decided it was too busy to include more detail. 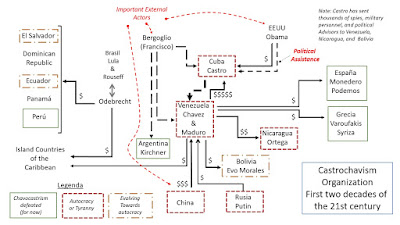 Key points to note are the Legend, which codes countries where autocracy or tyranny are already in power, countries evolving towards autocracy, and countries where castrochavism has been defeated, for now. I also included these sets of controversial links:

1. From Pope Francis (Bergoglio) to Cuba, Venezuela, and Argentina. Bergoglio has been a long term supporter of Cristina Kirchner, and hard core Argentinian communists (like de Bonafini). He showed key support for the Castro dictatorship by visiting Cuba twice at the beginning of his papacy. And he was a key player in defeating the opposition protest movement in Venezuela when he organized the failed dialogue in late 2016.

2. From Obama. Obama became a key supporter of the evolution of the Maduro dictatorship when he legitimized the Castro dictatorship and provided it with economic benefits, while failing to negotiate that Castro cease his de facto invasion of Venezuela with tens of thousands of spies, military personnel, political advisors, and key mentoring from high level Cuban officials based in Havana.

3. From China. China has been a key supporter, although its mostly interested in extending its mercantilist empire. Chinese support has been mostly in the forms of loans, which Maduro has ha difficulty paying back with oil, or by purchasing Chinese goods. The chinese have extended or delayed payments, recognizing that Maduro´s corruption and mismanagement have destroyed the Venezuelan economy.