A while ago I heard from Diaz Villanueva something about the use of intimidation and insult, and I thought that in the roll of climate change things have already reached that level.  And that of course is an extension of the left's hold on institutions of modern society that it should never have had.  And why am I writing this?  Because the record on the left in the last 100 years has been awful.. 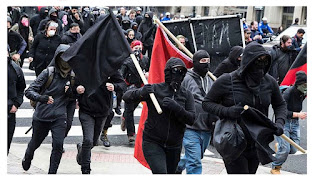 And where am I going?  The fact is that insult and intimidation are our daily bread, and that of course will not allow a reasonable debate to find answers that make sense.  For my part, I have realized that I am old, and that it is not really worth fighting in this area, although I know that what they are proposing will go very wrong.


So I leave them to continue living and, in a few decades, when they understand why they live in such miserable conditions, and if it is possible to speak freely (something that I doubt, because this has gone to hell and civilization is going towards a 1984 more  horrible than Orwell imagined) ... then try to teach young people that they must free themselves and never repeat the stupid things we did in the first decades of the 21st century.
No hay comentarios:
Enviar por correo electrónicoEscribe un blogCompartir con TwitterCompartir con FacebookCompartir en Pinterest

A Scientist needs your help

Letter from a black history professor

G. Floyd's murder is execrable but he is an example of non-discrimination.  He had a scholarship to the University.  He left his studies at the second year and embarked on a criminal path.  He did not take advantage of the opportunities that the system provided.

Here's a letter from a black history professor, who wrote it anonymously. The letter is being posted in several sites, but soon thereafter it's erased.

"I am one of your colleagues at the University of California, Berkeley. I have met you both personally but do not know you closely, and am contacting you anonymously, with apologies. I am worried that writing this email publicly might lead to me losing my job, and likely all future jobs in my field.

In your recent departmental emails you mentioned our pledge to diversity, but I am increasingly alarmed by the absence of diversity
of opinion on the topic of the recent protests and our community response to them.

In the extended links and resources you provided, I could not find a single instance of substantial counter-argument or alternative narrative to explain the under-representation of black individuals in academia or their over-representation in the criminal justice system. The explanation provided in your documentation, to the near exclusion of all others, is univariate: the problems of the black community are caused by whites, or, when whites are not physically present, by the infiltration of white supremacy and white systemic racism into American brains, souls, and institutions.

Many cogent objections to this thesis have been raised by sober voices, including from within the black community itself, such as Thomas Sowell and Wilfred Reilly. These people are not racists or 'Uncle Toms'. They are intelligent scholars who reject a narrative that strips black people of agency and systematically externalizes the problems of the black community onto outsiders.

Their view is entirely absent from the departmental and UCB-wide communiques.

The claim that the difficulties that the black community faces are entirely causally explained by exogenous factors in the form of white systemic racism, white supremacy, and other forms of white discrimination remains a problematic hypothesis that should be vigorously challenged by historians. Instead, it is being treated as an axiomatic and actionable truth without serious consideration of its profound flaws, or its worrying implication of total black impotence.

This hypothesis is transforming our institution and our culture, without any space for dissent outside of a tightly policed, narrow discourse.

A counternarrative exists. If you have time, please consider examining some of the documents I attach at the end of this email.

Overwhelmingly, the reasoning provided by BLM and allies is either primarily anecdotal (as in the case with the bulk of Ta-Nehisi Coates' undeniably moving article) or it is transparently motivated. As an example of the latter problem, consider the proportion of black incarcerated Americans. This proportion is often used to characterize the criminal justice system as anti-black. However, if we use the precise same methodology, we would have to conclude that the criminal justice system is even more anti-male than it is anti-black.
Read more ......>>>>>>
No hay comentarios:
Enviar por correo electrónicoEscribe un blogCompartir con TwitterCompartir con FacebookCompartir en Pinterest

HAS, I researched how the IPCC named RCP8.5 their “Business as Usual” (BAU) case. As you point out, they didn’t use the term in AR5, instead they began to use the term during press conferences and presentation of AR5 contents in late 2013 and early 2014. The BAU term became the standard they used in interviews and discussions, this was picked up by the media, and almost immediately we began to see papers referring to RCP8.5 as BAU.

This extended to training material used in universities, and to position statements written by scientific organizations in numerous countries. By 2015 almost all climate change papers referred to RCP8.5 as BAU, and this was also picked up by US government agencies during the Obama administration.

The period 2013 to 2018 saw a significant number of comments, articles and papers explaining RCP8.5 wasn’t BAU. I myself saturated the comments sections in newspapers and blogs with repetitive remarks about this error. In my case I came to conclude RCP8.5 wasn't BAU because of tendencies we observed: fossil fuel resources were increasingly more difficult to extract, competing technology prices were dropping, and the assumptions in RCP8.5 didn’t make sense (I’m not going to get into it here, but do remember the RCPs were scenarios prepared to meet an arbitrary IPCC request: they wanted four cases with four forcings, and the team preparing RCP8.5 had to include absurd system behavior to reach the 8.5 watts per m2).

We can’t blame the RCP8.5 authors because they were asked to deliver the target forcing. But I think a case can be made to accuse IPCC principals of scientific fraud for: 1. using the BAU term for RCP8.5 on a consistent basis, and 2. Failing to inform the scientific community and decision makers that RCP8.5 wasn’t really BAU.

I think we can also consider the ongoing (but increasingly feeble) defense of RCP8.5 as BAU without a corresponding correction by the IPCC as a sign that it can be considered a political organization with clear political goals, no regard for the quality of its products or their adequate use by the scientific community, and lacking in ethics to such an extent that it deserves to be shut down and replaced by a new organization outside of the UN structure.

The problems we see with the RCP8.5 use are a symptom of a very serious disease which has pervaded this field for decades, a disease which is now entering the realm of criminal behavior, because fake science is used to justify trillions of dollars in spending which are going to bring hefty profits to certain actors, and give geopolitical advantages to nations such as China and Russia (because they aren’t about to commit economic suicide cutting CO2 emissions to zero).

Criminal behavior can also be seen in the use of exaggerated alarmism to scare children, and put teenagers on the street asking for political changes (which conveniently demand the end of capitalism and parrot Neomarxist lines about climate justice, the white patriarchate, and etc).

Scaring and traumatizing children using false information is a criminal act, and such abuse ought to stop.  But we already know that radical political movements will stop at nothing, and unfortunately the climate change problem is now a weapon used by Neomarxist radicals as a means to take over.

And when we combine the economic harm they will cause with their repressive and social engineering methods, we may be about to see the West fall in the hands of a political faction which may eventually rival Stalin, Mao, Castro, and Chavez when it comes to its innate evil nature.