I lifted this text from a Twitter message posted by somebody who got it from somebody else's Facebook page.  It explains what happened in Syria to this point in time:

Secret recording of "The Guardian" editor and reporter

The following is a partial transcript of a security agency recording made at The Guardian newspaper offices in Manchester. It was in a hard drive lifted from the MI6 by a guy who works for the Polish Weather Service.

(JD) so, it's important you know I don't want to influence how you do your story

(Napster) I got it

(JD) what do you have in mind?

(Napster) I was thinking about a climate story with a scary angle. Giant hailstones.

(Napster) sure, hailstones are frozen rain. Giant hailstones are bowling ball sized chunks, they are deadly. This guy I know at East Anglia says he managed to trick his climate model to make giant hailstones. They cause a lot of damage. An outstanding catastrophic outcome from climate change.

(JD) did he publish it in a peer reviewed climate journal? That's very important. This material will sell much better if we can say it was peer reviewed.

(Napster) that's covered, the peer review at "Nature Climate Change" is finished, they really liked the story line, and the graphics are terrific. It's going for publication before Paris.

(JD) giant hailstones. I like that. How many does it say will die?

(Napster) about 5000 per year if we follow the Business as Usual case.

What do I think about Paris?

I have been reading and pondering about Paris for a while. This subject is controversial, everybody is pissed off, all sides are full of hate mongering nuts, and I really don't want anybody to hate me. 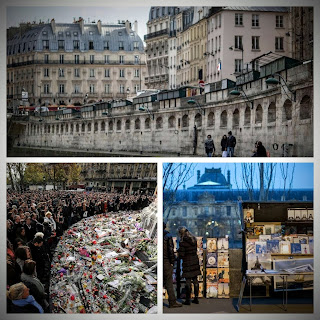 Paris is still there.

The refugees have become a controversial topic. The uncontrolled flow of hundreds of thousands of "refugees" into the EU allows the entry of terrorists who hide in that multitude. This is a fact. And this uncomfortable fact creates serious divisions between groups, ranging from the good hearted idealists who think free for all inmigration is the way to go, to pragmatists like me who understand the danger but support carefully controlled inmigration, and on to  the nativists who don't want any inmigration at all.

We don't know how many terrorists have been introduced or will be introduced in the future. If terrorist organizations want to send 500 hard core suicidal terrorists, they only have to hide one in one thousand. If 400 of those terrorists can activate and cause 15 dead and 30 wounded, we are looking at 6000 killed and 12000 wounded as a result of the current "Merkel-Hollande-Obama" policy. I think this figure can be cut in half if the refugee flow is restricted. More reductions are feasible if military action can end ISIS control over portions of Syrian and Iraqi territory.

This particular genie was seeded by the USA invasion of Iraq and the subsequent creation of a corrupt and human rights abusing Iraqi regime by the Bush administration.

The ISIS genie is the result of history. We can't really blame Bush for WWI and the partition of the Ottoman empire.  The list of culprits goes around the block over and over and over. The  ISIS genie was let out of the bottle by Obama, Hollande, Merkel,  and others when they fueled an endless Syrian civil war. I realize most politicians are somewhat stupid, but these guys have been outstandingly dumb. Only the Bush-Cheney-Rumsfeld-Wolfowitz-Rice combine has done a worse job. And this means it's likely the US Republicans won't do a better job.

The shit hit the fan, our dear leaders are likely to make this an endless war, we will lose our liberties, and that's all I have to say about Paris.

The real reason for the war in Kosovo

"Why did NATO suddenly decide to do this? Why defend Kosovo Albanians?"

These were the questions asked by a friend in 1999, when NATO bombed Yugoslavia to forc it to sign the agreement that allowed the organization to turn Kosovo, a province of Serbia (then part of Yugoslavia) in a US protectorate and EU.

My answer, written in 1999 after the end of the bombing was:

I've been worried about the Kosovo crisis like you, and I want to use you as a judge of a thesis I am developing. My position is based on the information extracted from the US State Department, Stratfor, the Library of Congress, the UN, NATO, the press, and other sources.

To justify the war, Clinton and Blair sold to the public the idea that the NATO intervention in Kosovo was intended to rescue the Albanian population of that region. They had to save this Muslim population (almost one million people) from a genocidal campaign conducted by Christian Serbs.  They also said they wanted to offer a measure of autonomy to Kosovo, and pledged that the rights of the Christian minority in Kosovo would be protected.

The problem, as I see it, is that genocide did not occur, was just an excuse, and NATO actions precipitated the result that Clinton and Blair said they wanted to avoid.

Clinton also made a mistake when he assured the US public neither army troops nor marines would be used. Clinton thought that the bombs would do the trick. But Milosevic, knowing that troops were not on the game board, thought the NATO bombing would end when they realized that the Serbs were unwilling to surrender. Both sides miscalculated.

The bombardment began, the Serbs did not give up. They never even remotely thought of allowing control of Kosovo by NATO. Instead, they took revenge on the Albanians. They began the forced expulsion of the population in late March and early April after the bombing began. Albanians were injured, killed and abused. Hundreds of thousands of people were forced to flee their homes. Milosevic, with the full support of the Serbian people, was telling NATO go to hell.

Why the Serbs did not give up

NATO did not understand that the Serbs would resist, because Kosovo was, and still is, an integral part of their nation. Kosovo was carved from Serbia using brute force. Today the Serbs are a minority in Kosovo because the Albanians immigrants have taken over the region. However, the Serbs still believe that Kosovo is theirs, and that they are the victims of Albanian aggression. They think they made a mistake when they allowed their numbers decrease in Kosovo, while the Albanian Muslims increased their numbers to become the majority.

Failing the initial plan, General Wesley Clark came up with the idea of ​​bombing "military" targets located within areas full of civilians. Clinton and Blair, knowing that the new plan was to kill large numbers of innocent people,  approved the idea to bomb government buildings full of civilians and / or located in densely populated areas.

Born in Miami, Florida in 1971, Rubio is the son of Cuban immigrants. After earning a bachelor's degree from the University of Florida in 1993, he went to the University of Miami for his law degree. Rubio's political career began with his election to the West Miami City Commission in 1998. He was elected in the Florida House of Representatives the following year. In 2009, Rubio won his campaign for the U.S. Senate. 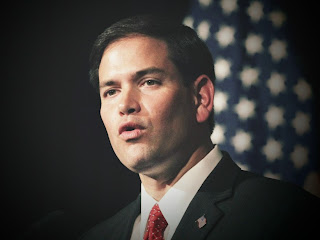 Both of his parents worked hard to support the family. His father spent years as a bartender.
Rubio became interested in public service early on. He has told the press, "I gained an interest in politics and history from my uncle Fernando, who would teach me about everything: Etruscan history, how to build a Mongol bow, Talmudic law and Zionism, quantum gravity, making ham and cheese sandwiches, and electoral strategy".
No hay comentarios:
Enviar por correo electrónicoEscribe un blogCompartir con TwitterCompartir con FacebookCompartir en Pinterest
Entradas más recientes Entradas antiguas Página principal
Suscribirse a: Entradas (Atom)