Change in Oil Price and production parameters versus Time

The following two plots use data from the BP factbook, through 2013. I dumped the production data, in barrels per day, into a spreadsheet, and obtained the decline factor year by year for all the countries (or in some cases groups of small producers, as lumped by BP).

Note that BP includes Natural Gas Liquids in this "Oil" production data. This tends to disguise production decline rates in some countries, when their natural gas production is aimed at producing gas rich in NGLs (such as for example the US).

I also used BP´s oil price, in constant 2013 USD, as listed in their factbook, and obtained the price difference from year to year, so I could plot it in the same graph.

The first graph shows oil prices bounded in a plus/minun $10 barrel per dollar envelope from 1987 to 2004 (with one exception). Starting in 2002 we see prices increase gradually, there´s a dip during the 2008 and 2009 economic crisis, and then they fail to increase for two years (followed by the 2014 and ongoing 2015 dip).

What makes this plot interesting is the combination of the green dots (the oil price changes) and the yellow dots. Those are the average change in oil rate for the countries/groups in the BP data base. The average of all these countries declines over time (the dotted line is a linear fit), Crucially, when oil prices begin to climb in the 21st century, the average swings from positive to negative after 2005.

This means that the typical oil producing country experienced declining production in spite of rising oil prices. They seemed to lack the ability to react to the price increase signal. 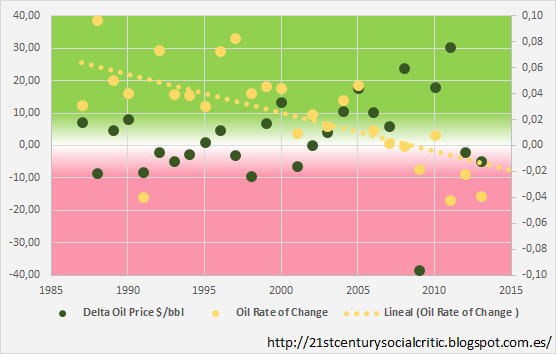 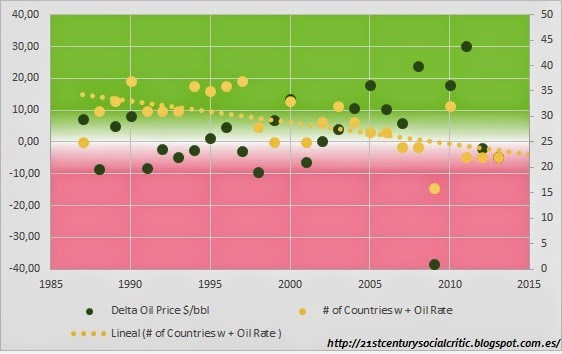 The number of countries with the ability (or political environment ) to increase production seems to drop gradually. And the oi price increases seen in the 21st century don´t seem to impact the trend. The price signal just doesn´t seem to be high enough to make some countries react to higher prices.
Enviar por correo electrónicoEscribe un blogCompartir con TwitterCompartir con FacebookCompartir en Pinterest