Introduction: I was asked by an acquaintance to show why I've been saying that Democratic Socialists are hard core marxists closely associated with the German marxists who operate the Rosa Luxemburg organization, which in turn is a subsidiary of the German communist party now known as "Die Linke". This is a key topic because Alexandria Ocasio-Cortez has been elected to the US Congress, which means she's associated via DSA with the Die Linke organization. One interesting fact is that Rosa Luxemburg, a Die Linke shop, is heavily financed by the German government, led by Angela Merkel, who was born in communist East Germany, just like many of Die Linke's top leadership. 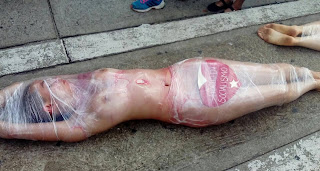 Item I . Rosa Luxemburg and Die Linke German communists) meet and train Democratic Socialists of America and other US communists

"A conference “Mapping Socialist Strategies” was convened from Aug. 1 to 4 in Briarcliff Manor, New York, by the New York office of the Rosa Luxemburg Stiftung. It brought together 100 “influential progressives and leftists” from across the United States, Canada, and Europe for an “un-conference” on socialist strategies.
Plenary No. 4 was entitled “overcoming fragmentation and rebuilding the Left.” It states: “Michael Brie and Sarah Leonard discuss building left alliances and new trends on the left. How can the left rediscover and strengthen relationships amongst natural allies in the fight to defend the public sphere and defeat encroaching neoliberalism?”
Panelist Sarah Leonard was an editor at DSA-linked publication Dissent magazine and a DSA member.
Did Leonard have any inkling that her co-panelist once spied on young foreigners like her? Does she understand that Michael Brie once sought to recruit ego-driven young idealists to spy on their own countrymen for a totalitarian dictatorship?
Most of DSA’s top leadership were present at the conference, including DSA National Director Maria Svart, DSA Vice Chair Joseph Schwartz, DSA-linked publication Jacobin editor Bhaskar Sunkara, Jacobin magazine national organizer Neal Meyer, former Young Democratic Socialists of America (YDSA) leader Betsy Avila and the legendary Frances Fox Piven of the “Cloward-Piven” strategy, which sought to “overwhelm the system” in America by flooding welfare to deliberately bankrupt states. Two DSA members Ethan Earle and Heidi Chua Schwa from the RLS-NY office also attended, as did several German-born staff.

"The Rosa Luxemburg Foundation (RLF) is one of the six major political foundations in the Federal Republic of Germany.
Rosa Luxemburg was one of the historic founders of the current of democratic socialism ideal, focused on achieving social justice and political freedom. Inspired on these principles, the Foundation has made major contributions to political initiatives in Germany, and positions itself within original and current democratic socialism thinking.
From its beginnings, with the small groups of Social Critique and Political Education, founded in 1990 in Berlin, RLF has evolved to become an international political education organization, providing the possibility for discussion and fostering critical thought, as well as political alternatives. It is a non-profit organization affiliated with the Leftist political party (Die Linke, in German)."
Note: The head of Rosa Luxemburg is Dagmar Enkelmann, the former head of the German communist party known as "Die Linke".
https://www.rosalux.org.ec/la-frl-en-el-mundo/?lang=en

"I’m a staff writer at the socialist magazine Jacobin and a member of DSA, and here’s the truth: In the long run, democratic socialists want to end capitalism. And we want to do that by pursuing a reform agenda today in an effort to revive a politics focused on class hierarchy and inequality in the United States. The eventual goal is to transform the world to promote everyone’s needs rather than to produce massive profits for a small handful of citizens"