Corporate greed, profits, and the environment

I wrote a comment at Open Mind a few minutes ago, the subject is oil company profits, whether they know the greenhouse effect is real, etc.  I'm not sure it'll survive, so I decided to copy and paste it here. 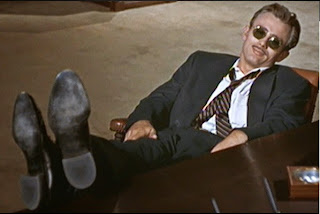 Image from "Interview with an oilman", an older post I wrote spoofing conspiracies

To make sure you get the full story, the original post by Tamino is

The full text is here: https://tamino.wordpress.com/2015/07/09/corporations-are-interested-in-environmental-impacts-only-to-the-extent-that-they-affect-profits/#comment-88977

The exchange was rather limited because Tamino chose to censor my second response, and this was followed by the usual insulting comments one sees in these exchanges. That blog is a fairly inbred heavily censored collection, so I wont be visiting it anymore.

I was a mid level technical and operations supervisor for a large multinational, and I saw a mixed bag of attitudes within the company as well as within other oil companies we were partnered with.
At a high level, most companies worry about their image, the brand. A good image enhances profits. It helps recruit brighter and more educated personnel (oil company employees aren’t subhuman pollution loving monsters, the younger generation in particular likes to go have pizza and not have to hide where they work).

At lower levels it depends. I saw managers who had to be policed and watched over. This was critical because managers who were willing to cut corners would pollute AND get people killed. When it comes to priorities, getting people hurt has to be avoided, period. So a good indicator of injury risk is the “sloppiness” management can have in the environmental area.

I see a lot of confused logic in your post. Companies focus on profits. Duh. McDonalds sells French fries, car companies sell large SUVs, Budweiser sells beer, and Hollywood markets violence. And that’s about profits. And there’s nothing really wrong with that. The quest for profits makes the economy works better and keeps civilization moving forward much better than the garbage they had in the Soviet Union or supposedly have in Castroite Cuba. At a higher level society simply has to channel and control the greed with laws and regulations.

Later: amazingly, I got a response.

"Response: How utterly twisted that you accuse this post of “confused logic” when it consists of only two things: 1) statements of fact; and 2) a direct quote from a long-time employee of Exxon.

Of course corporations seek profits. The important point — made by a long-time employee of Exxon and Mobil — is that profit is the only thing that matters to them; risk to others is irrelevant unless it affects their profit expectations.

Your eagerness to act as an apologist for Exxon isn’t flattering to your ethics."

Your confused logic shows when you highlight in your title a quote from the email. I tried, but failed, to broaden the perspective by discussing my experience. And as I wrote in my first comment, what I saw from the inside was a mixed bag.

I never met Berstein (I didn’t work at Exxon, but I ran into them once in a while). If he was the inhouse climate expert he was probably working at EPR in Houston. This gave him a limited view of what goes on. My view was also limited, but I think I was exposed to much more than he was. And there are lots of companies other than Exxon.

If you see me writing an apology, I see myself writing a comment to broaden the discussion. This could be interesting, but only if you are willing to accept I exist not as you wish me to be, but as something else you have very little knowledge about. Now it’s your choice, stay on your throne, or sit down to chat.