A few days ago I read PDVSA and Russia´s Rosneft had signed another agreement which commits Rosneft to invest $14 billion in Venezuela´s oil industry. After the deal was signed, President Maduro boasted it would allow Venezuela to double its oil production. 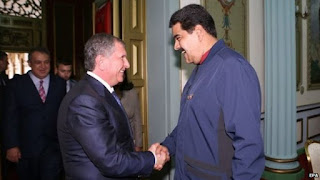 Maduro shakes hands with a Russian one more time

I´m not sure if Maduro was lying, or if he so stupid he believes the lies  PDVSA managers tell him, because the amount of money involved isn´t enough to let the Rosneft partnership produce even 15 % of what Venezuela produces today. One would think by now Maduro would know better. Maybe it´s a little bit of this and a little bit of that:  he was lying, and he also believes the lies Eulogio del Pino and other PDVSA managers tell him, which confirms he´s pretty stupid given that oil generates most of the hard currency income his regime needs to stay barely alive.

Rosneft´s presence in Venezuela dates from its involvement in the “Russian Consortium”, which had expressed an interest in what is called “Junin 6 Block”. This block is reported to have about 50 billion barrels of oil in place, with 10 billion barrels recoverable. I think the first figure is probably ok, but the second figure is fiction (more about this later).

The map below shows the Orinoco Oil belt, which has been divided into four sectors, which in turn are divided into blocks. The Western most sector, Boyacá, has terrible oil reservoir conditions, and surrounds a national park. As far as I can see, that whole sector is a write off, and won´t ever be produced. 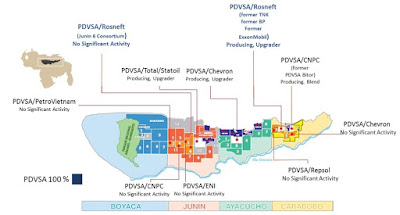 Orinoco Oil Sectors and blocks, showing the main players.
the Rosneft (consortium) Junin 6 block is the white one on the left.

The reservoir quality improves from left to right, and the very best areas are in what is called the Carabobo blocks. These include a CNOC (Chinese) JV, the Rosneft Petromonagas block they got from TNK-BP, Block 1,  in which Repsol is the main foreign investor, and  Block 3 in which Chevron is the main foreign investor. Rosneft´s Petromonagas shares are the shares previously owned by BP as ExxonMobil´s  minority partner, shares which were later sold to TNK BP,  and then by TNK BP to Rosneft.

Rosneft also owns shares in other  joint ventures in Venezuela, acquired when it bought TNK-BP from BP. These are two small properties producing medium and light crude.

I got communist friends who like to boast about Chávez nationalizing the oil industry. Chávez sure used to brag a lot about it, so maybe they swallowed Chávez´ bullshit. What Chávez did was to convert the existing foreign owned ventures, some of which operated as service contractors (meaning PDVSA  had retained ownership of the oil fields), into Joint Ventures. This seems to be a vehicle the Cubans, Chinese, Vietnamese, and other communist regimes like to use when they make deals with foreign investors.

The Joint Venture structure is fine, and on paper gives the foreign investor MORE rights than the structures used by PDVSA prior to the Chávez era. But the JV structure lacks the ability to arbitrate or recoup the invested money outside the Venezuelan legal system, something most companies consider an extremely dangerous set up (this is what made ExxonMobil and ConocoPhillips refuse to take the new JV deal, and proceed to file for arbitration outside Venezuela).

I think those companies which stuck around in Venezuela after the Chávez “offer” to change into the no arbitration JV regime wanted to be able to book huge reserves volumes (under the JV legal set up the reserves do belong to the foreign investor). But they knew these deals were high risk, and they didn´t intend to invest much other than to try to keep production from declining. They have failed to accomplish this to a large extent, basically because PDVSA holds a majority interest in these Joint Ventures, but PDVSA lacks the will and the  money to invest real money. What PDVSA seems to be doing is drilling acreage around the heavy oil properties held by the foreign JV´s, and using the JV upgraders to process oil from the areas owned 100 % by PDVSA. This, of course, is unethical. But chavism is well known for its corruption, drug dealing, and lack of ethics.

And this explains in part why we see these blocks inked by foreign investors who dabble a little bit, sign vaporware deals which lead to major announcements by Maduro and his cronies, but which in the end amount to chicken feed in the real oil industry. Which also explains in part the reason why, in spite of their dire need to increase production, the chavistas can´t get Venezuela´s production to stop declining.

Rosneft happens to be an odd oil company. They are owned in part by BP, and this means they have to behave as a rational investor. But they are also owned by the Russian government. And this means they got big time political cover. In spite of the political clout it enjoys,  Rosneft, thus far, seems to have barely moved to produce those highly publicized 50 billion barrels in the Junin 6 block. I think they keep stalling, waiting to see if Maduro keels over and the government becomes a little more rational, so that PDVSA can be more like a real oil company and become something beyond the red painted mental asylum it has become under the chavistas.

On top of the commercial risk, and PDVSA´s lack of cash and mental capacity,  the Chevron Carabobo 3, Repsol Carabobo 1, Rosneft Junin 6, and other new JVs signed up in the last 5 years face significant problems which preclude investing to get those blocks to produce as they could. These include PDVSA´s inability to attract large engineering and construction firms to work in Venezuela (high crime, surreal exchange rate, and PDVSA´s tendency to avoid paying its bills are the main reasons).

Another problem is logistical. To recover the oil PDVSA wants to recover (about 20 % of the oil in the ground), the JV projects will need to use large amounts of electricity and natural gas. Which means they have to rely on PDVSA to install the infrastructure to deliver the gas (or allow others to do it, something PDVSA doesn´t do which in turn explains why Venezuela has a gas shortage and imports gas from Colombia). The gas would be used as fuel (for steam to help produce the oil, and for electric power generation), and  to generate hydrogen in the upgraders they are supposed to build to make the extra heavy oil more marketable.

Finally, there are technical problems associated with a development in the Junin block which Rosneft can´t do much about. As we can read in the articles about the deal, the Junin 6 oil sands are shallow. Shallow in this case means low temperature, and  low pressure. Low temperature means high viscosity. Very high viscosity because that oil is 8 degrees API (it´s identical to the Canadian heavy oil being sent to US refineries).  That oil is so thick it barely flows. And this is a key difference between the Junin 6 block and the areas already producing, which happen to be deeper, warmer, have higher pressure, and  have better quality rocks.

Shallow means lower cost  wells, but the wells barely produce. To make the wells produce more it takes a lot more investment, and a lot more in daily operating costs. And Rosneft knows it.

All of these reasons explain why Rosneft hasn´t done much to produce that oil, why the 400,000 Barrels of oil per day they like to discuss as the peak production for those blocks is never going to be achieved, and why we keep reading fanciful boasts and meaningless statements.

Meanwhile, Venezuela´s oil production continues to decline, and will probably do so as long as the Maduro (chavista) regime remains in power. In the end, may be what´s best for Venezuela is for the oil to stay in the ground. That oil has turned out to be the Devil´s excrement, because it  allows the regime to stay in power.  And that isn´t good for anybody except for Maduro, his friends, the parasite known as the Castro dictatorship, and the oligarchs and drug cartels allied with the regime.