Ninety Seven Percent  of expert scientists agree that human CO2 emissions are altering the world’s climate (Cook 2013), but segments of the public stubbornly remain unconvinced by the scientific evidence (Lewandosky, 2012).  Climate models provide a glimpse of the future, and while they do not agree on all of the details, most models predict a few general trends (Randall 2007). First, according to the Intergovernmental Panel on Climate Change, an increase of greenhouse gases in the atmosphere will increase temperatures (IPCC 2013). More uncertain outcomes of an increase in global temperatures include increased number of storms, including mid-latitude tornadoes (Riebeek, 2005). According to a very complex study, in 2005, US$2 to US$14 billion of the recorded annual losses could be attributable to climate change  (Estrada el al, 2015). 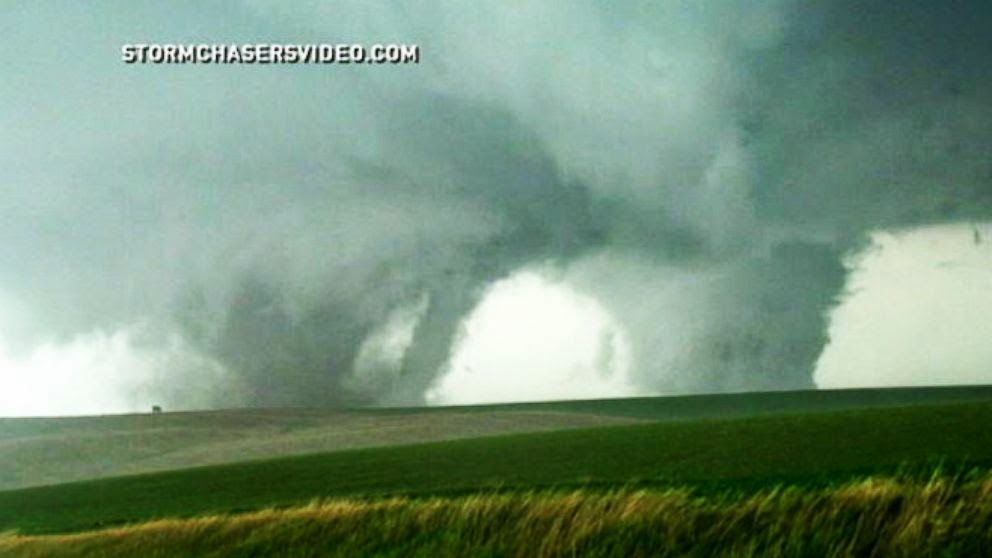 Here we report the results of a data manipulation used to derive what we term the “F” parameter or index, which can be used to predict future tornado frequency increases as the earth warms.  Paralleling previous work by Lewandoski, Cook, and others, we have used a conception of free style conjoining of widespread parameters we have selected  to mathematically prove what we did.

We additionally show that the climate anomaly for the USA state of Missouri is a key player in tornado frequency for the continental USA. This provides empirical confirmation of previous suggestions that connecting temperature anomalies to other factors can yield acceptance of science which will be strongly associated with the perception of a consensus among scientists.

In our case we used the El Niño Southern Oscillation Index,  as reported by Mike Daly, as well as the Hadley Center temperature anomaly data downloaded from Google Earth.

Missouri generally has a humid continental climate (Köppen climate classification Dfa), with cool to cold winters and long, hot summers. In the southern part of the state, particularly in the Bootheel, the climate borders on a humid subtropical climate (Köppen Cfa). Due to its location in the interior United States, Missouri often experiences extremes in temperatures. Not having either large mountains or oceans nearby to moderate its temperature, its climate is alternately influenced by air from the cold Arctic and the hot and humid Gulf of Mexico (Wikipedia 2014).

El Niño involves warming of the eastern tropical Pacific Ocean (Bove 1999, Tisdale 2014). Here we base the definition of an El Niño event as developed by Mike Daly in a graph we found using google.

This was copied from the Bove paper: “A tornado is rotating column of air usually accompanied by a funnel-shaped downward extension of a cumulonimbus cloud and has destructive winds of up to 300 miles per hour (Rotunno, 1986). The United States has the largest number of annual tornado events in the world, causing millions of dollars in property damage and killing dozens of people annually (Grazulis 1991).”

Climatic data was collected from graphs available in the Google Image Facility. The first study phase involved copying the tornado frequency (Perry 2013). Figure 1, a skeptic version,  shows the plot prepared to prove tornadoes aren´t increasing. Monthly coefficients of variation can be as high as five times the observed mean, and in the same order of magnitude of the average for the complete data set. 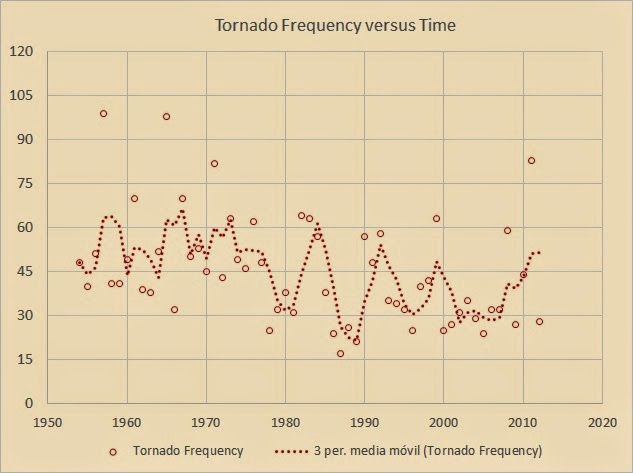 The evident lack of correlation between the tendency seen in this graph and what we believed led us to discard the raw data as seen above. At that point we were heavily influenced by the following quote from the Huffington Post:

“Michael Mann, a climatologist who directs the Earth System Science Center at Pennsylvania State University said “If you’re a betting person — or the insurance or reinsurance industry, for that matter — you’d probably go with a prediction of greater frequency and intensity of tornadoes as a result of human-caused climate change.”” (Peeples 2013).

The next data manipulation step involved obtaining the natural logarithm of the tornado frequency we obtained from Perry 2013. As seen in Figure 2 below, the fourth order statistical regression curve shows a decreasing tornado frequency. This too was judged unacceptable. 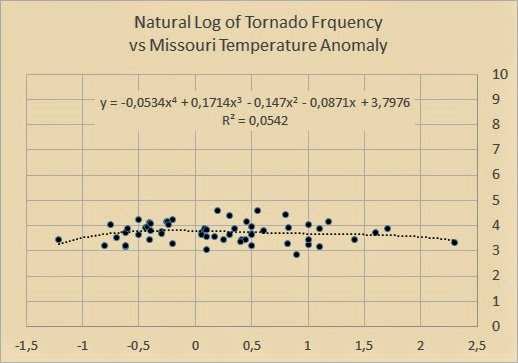 As mentioned above, ENSO is a very important climate parameter, this led us to plot the ENSO Index and the Missouri Temperature on the same plot, as seen below: 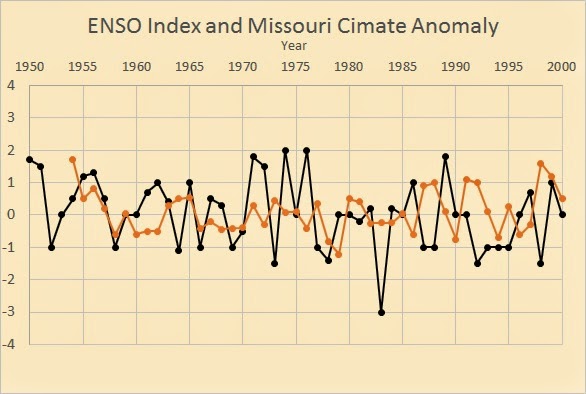 The figure shows these two data sets wiggle with nearly identical statistical frequencies. The correlation index is considered to be identical to that of tree ring width and temperature during the second half of the 20th Century. ¨Stimulated, two photon Bragg scattering was used for spectroscopic measurement¨ (Inouye PhD thesis  2001).

Considering statistical frequency (which need not be confused with the frequency of a Bose Einstein condensate), the procedure led to the subtraction of the Missouri Temperature Anomaly from the ENSO Index (hereby known as the “F” Parameter). This is considered a valid step, inspired by the following comment:  “With this method, the SST anomalies regressed with the Nino1+2 SST index are removed from the total SST anomalies before an EOF analysis was applied to obtain the spatial pattern of the CP ENSO.” (Kao and Yu 2009; Yu and Kim 2010).

The next step was to perform a colonoscopy on the data. During a colonoscopy, a long, flexible tube (colonoscope) is inserted into the rectum. A tiny video camera at the tip of the tube allows the practitioner to view the subject inside out (Mayo 2014).

The key to proper removal of the previous trend was the use of the “F” Parameter instead of the actual temperature anomaly. This allowed us to prove conclusively the connection between the climate and tornado activity. A plot of the natural log of the tornado activity versus the F parameter is shown in Figure 4. 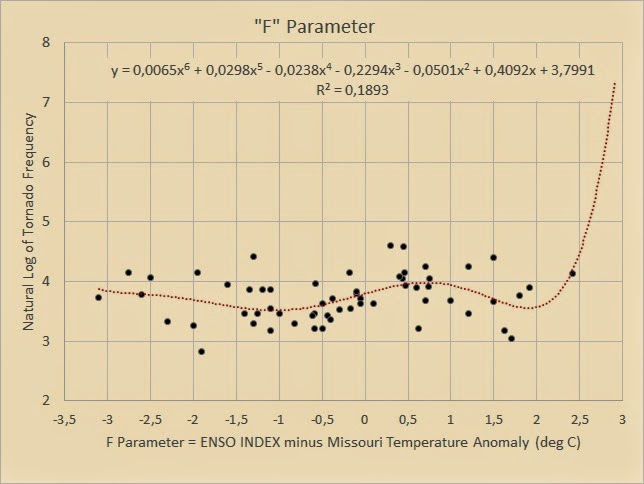 As seen in the figure, a sixth order regression with R=0.189 proves conclusively that tornado activity will increase as F Parameter increases. The equation, extrapolated to an F value of 3, demonstrates as many as 1500 tornadoes could strike the United States if the ENSO Index were to reach  5 when the Missouri Temperature Anomaly approaches 2 degrees C.

The F Index is a representative example of the new science of climatology and the  teleconnection between scientific/political objectives and subjective science. It is our sincere hope that Presidential Science Advisor John P. Holdren uses these key findings to silence those who wish to deny the enormous increase in tornado activity we may see (remember, up to 1500 tornadoes per year are within the realm of possibility according to this work).

We must fervently adhere to  universal truth,  as spoken by the 97 %, and avoid denialist jargoneering, which reaches extremes  such as saying things like   “it is brazen for zombie science to show up in the White House” (Twitter by Pielke 2014).
Enviar por correo electrónicoEscribe un blogCompartir con TwitterCompartir con FacebookCompartir en Pinterest