Is Venezuela Running out of oil?

Reuters has reported that Venezuela is importing light crude oil,  to dilute with the Orinoco Heavy Oil belt crude,  a technique which allows the blend to be exported to overseas refineries. According to PDVSA´s official story,  the crude is being imported because they are shutting down an oil upgrader they own,  together with Total and Statoil,  for planned maintenance. However, they left out Venezuela´s shortage of internally produced light and medium grade crude oils, which PDVSA could have used as a diluent. 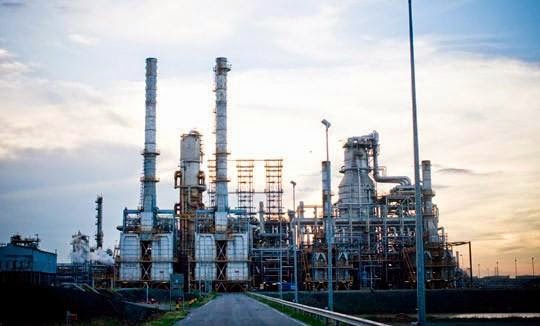 The following sketch shows Venezuela´s extra heavy oil fields and associated production, treatment and export systems. Added to these systems is the import crude oil and naphta stream, a relatively new development, which appears to be required due to production drops at Venezuela´s medium and light oil fields.

The Orinoco Heavy Oil belt produces a really low quality oil, which contains metals, sulfur, and salt. This oil is so heavy it has to be diluted so it can be separated from the salt water and  natural gas streams which are produced together with the oil. The treating system installed by the joint ventures PDVSA created with multinationals included a central plant connected to an upgrader located hundreds of kilometers away.

The upgrader is like a partial refinery, it breaks up some of the extra heavy oil molecules, adds a small amount of hydrogen, and this yields a syncrude which can be carried by tankers to the world market. Venezuela has four upgraders built by the PDVSA-multinational ventures in the 1990´s and early 2000´s  (two of which were suffered partner losses when PDVSA insisted on changing commercial terms).

So what´s the big deal about these news? PDVSA has oil  and gas fields located to the north of the Orinoco Heavy Oil Belt. Historically some of the oil from these fields has been mixed with the heavy crudes to make marketable blends. However, PDVSA under Chávez has been a very poor performer, and the lighter crude fields have suffered serious capacity losses in the last fifteen years. 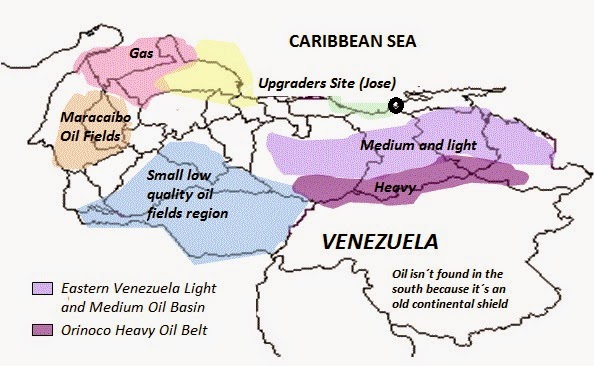 Map of Venezuela, showing the three major oil producing regions:
1. The Orinoco Heavy Oil belt, 2. the Eastern Venezuela light
and medium crude basin located to the north of the oil belt.
Also shown are other areas which have declining production,
such as the Maracaibo Oil fields.

A more professional operator would have anticipated the natural field decline, avoided the mismanagement and lousy operating practices of today´s PDVSA. Also, it would have built upgraders to allow the oil to be partially refined within Venezuela. This process would allow a value added product to be exported.

Unfortunately PDVSA under Chávez and now under his heir, “Nicolás” Maduro, has been horribly mismanaged. I´d say it has been gutted. This means the oil fields which would have produced the light crudes they could use as diluents are on fumes. The problem PDVSA faces is terrible, now it must import very expensive crude from Algeria to make up the internal shortfall.

To show you just how bad things have become under Chávez and Maduro, I want to quote from Andrés Oppenheimer:

I want to repeat this point: the argument they make about the upgrader maintenance is baloney, a well managed PDVSA would have secured its own lighter crude supply, built the required upgraders, and ensured it had a marketable oil stream which didn´t require oil imports from North Africa to be viable.