The following documents an estimated worldwide  CO2 emissions profile to the year 2075.  It was triggered by my curiosity after reading the following statement made by Christiana Figueres1:

In other words, Figueres believes we can´t burn two thirds of our fossil fuel reserves?. She says this is necessary  to keep the world´s surface temperature from rising 2 degrees C versus the temperature prior to the mid 19th century.

Note: in a later post I compare the case I describe below with the results from the Obama, EU, and China proposals: http://21stcenturysocialcritic.blogspot.com.es/2014/11/obama-china-europe-co2-plan-results.html 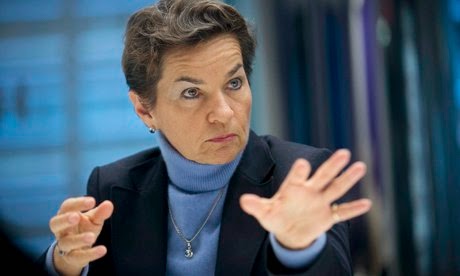 I´m very  familiar with the oil and gas industry, and I know a little about coal. My background really helped, this estimate took me about three hours….

First I took the BP Factbook reserves data for gas, oil, and coal. BP provides a breakout for the extra heavy oil found in Canada and Venezuela.  I shifted some of the other oil reserves to a class I called “heavy” (don´t ask me how, that´s secret). This yielded a total of 1100 billion barrels “non heavy” and 570 billion barrels of “heavy” oil reserves. I separated the two so I could estimate the future worldwide oil production profile based on the oil types (the two types of oil behave in different fashions and have quite different production curves).

The total production figures were converted to CO2 emissions (this was easy, I started using my personal library as a source  to prepare the estimate, but then I decided to do a search and in the end I  used the USA EPA´s factors). 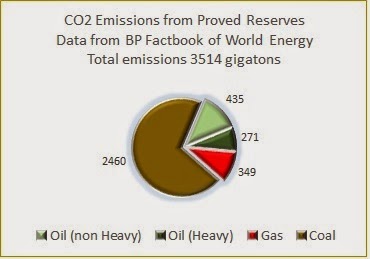 The CO2 emissions were used to estimate the atmospheric CO2 concentration. I assumed half of the emissions stay in the air, and half are absorbed by plants and the ocean. 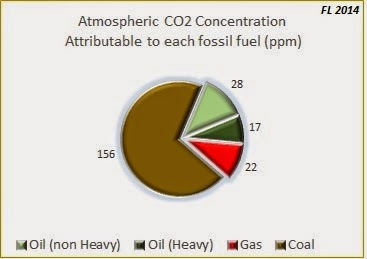 CO2 concentration in the atmosphere (ppm)

If we stack these figures we get the following atmospheric CO2 concentration resulting from the burning of 100 % of the fossil fuel reserves, divided by type. Each bar represents a cumulative number when the concentration due to each fossil fuel is stacked on top of the previous fuel class. 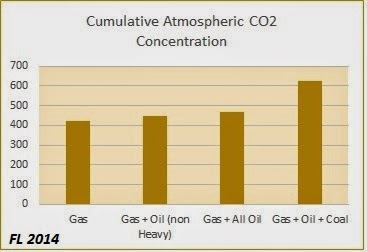 I prepared oil, gas and coal profiles from 2014 to 2075. I relied on my knowledge of oil and gas (extrapolated to coal)  to prepare these profiles. Some of the details are debatable, but in general I think the curves stand a reasonableness test. The values in the graph are expressed as a fraction of the total proved reserves in the ground. 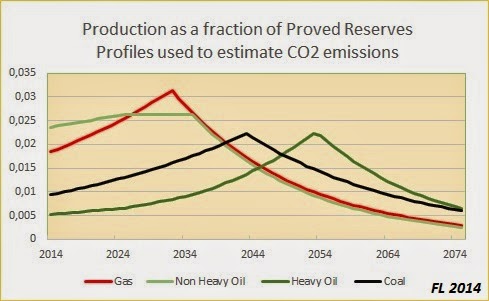 Fossil fuel profiles, expressed as fraction of the total
proved reserves which are produced in a given year

The CUMULATIVE CO2 concentration concentrations which resulted from the combustion of each fossil fuel were plotted in a final curve, which gives my predicted future from 2014 to 2075 as we burn the proved fossil fuel reserves. 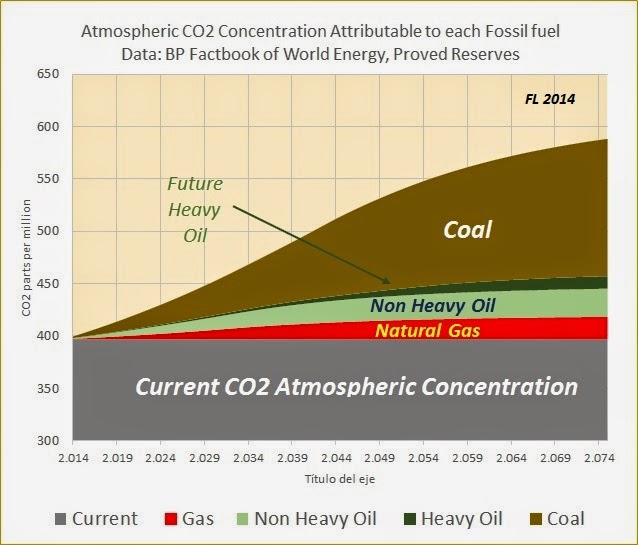 What are the implications? First, if we burn ALL the proved reserves atmospheric CO2 concentration will reach 623 ppm (this would happen after 2075). This concentration amounts to 2,23 times the 280 ppm climatologists use as a reference.

So where do I go from here? Nowhere. Beyond this point it´s a climatology issue. The temperature increase which results from a given increase in CO2 concentration is a debatable figure. Notwithstanding President Obama´s "97  %" bullshit, that point IS being debated. My guess is that temperature may increase roughly  0.6 degrees C above today´s temperature, when the CO2 concentration reaches 560 ppm, AROUND 2060,  if we burn fossil fuels at the rate I predict and the Transient Climate Response is around 1.5 degrees C to doubling CO2 concentration  (I don´t want to get into a debate, this was prepared in a midpoint so it can be used by almost everybody).

Note: I decided to imitate Michael Mann and introduced a harmless  trick in the paragraph above.   Please take pencil and paper and sketch it before you have a cow.

Will a 0.6 degree C  increase  be that worrying? Or are we going to be hysteric because the world´s fossil fuels are running out on us? If we don´t find additional reserves to prove we will probably be hysteric. However, if I´m wrong and we do find a lot of new reserves and the TCR is as high as some think then we will be hysteric about the climate. So the keys seem to be 1. the TCR, 2. the amount of reserves we will find, and 3. whether we can develop useable alternatives.

Later: I had a request to post a graph showing total liquids production as reported by BP, compared to refinery runs. The graph below shows the two requested curves. I added a corrected production curve. This was estimated by subtracting NGL´s, Qatar condensates and Bakken light oil. Note how the red line (the total liquids) is gradually diverging from the "old crude oils and condensates". 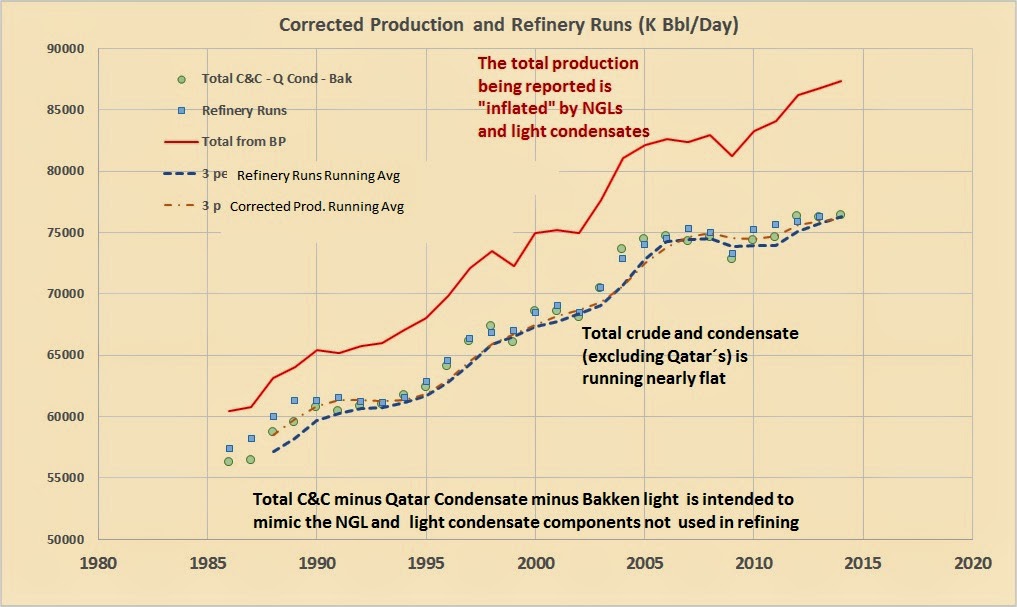 1 Karen Christiana Figueres Olsen is a Costa Rican diplomat, daughter of a three time president of Costa Rica Jose Figueres (before entering politics José Figueres used to be a  successful coffee grower and rope manufacturer, whose businesses employed more than 1,000 sharecroppers and factory laborers, and who was  well known for his kind treatment of the workers he hired).  Her mom is a US born former Costa Rican ambassador. Figueres graduated from Swarthmore. Later she obtained a  Master’s degree in social anthropology from the London School of Economics (?).  Christiana was appointed Executive Secretary of the UN Framework Convention on Climate Change (UNFCCC) on May 17, 2010.  Christiana is married to Konrad von Ritter, a German citizen who works for the World Bank.  (from Wikipedia)

2 “UN climate chief calls for tripling of clean energy investment - Christiana Figueres says $1 trillion a year is required for the transformation needed to stay within 2C of warming.” (from The Guardian).

This work hasn´t been financed by the Koch brothers, nor Big Oil, nor  the World Climate Denial Foundation, nor Antony Watts nor any other person nor organization I know of.