We can blame the USA for low oil prices

World oil prices have been dropping recently, from over $100 per barrel to less than $80 per barrel in November (I expect they will be around $40 to $50 for a while, then start climbing and return to the $80 level by early 2016). 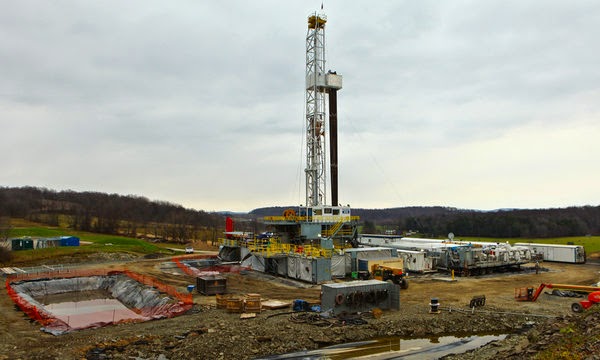 Oil prices are dropping because US oil producers are drilling and fracking a large number of horizontal wells, and this has caused a hefty increase in US oil and other liquids production. However, I should clarify that production from those fracked horizontal wells tends to include a large fraction of very light hydrocarbons, which aren´t real crude oil. These light hydrocarbons are ethane (C2H4), propane (C3H8) and butane (C4C10). These liquids can´t really be considered crude oil.

To help you understand what´s going on I want to show the total world liquids production. This includes crude oil (found as a liquid in the reservoir), condensate (gases which condense at the surface), very light hydrocarbons (the ethane, propane and butane “family”) as well as biofuels: 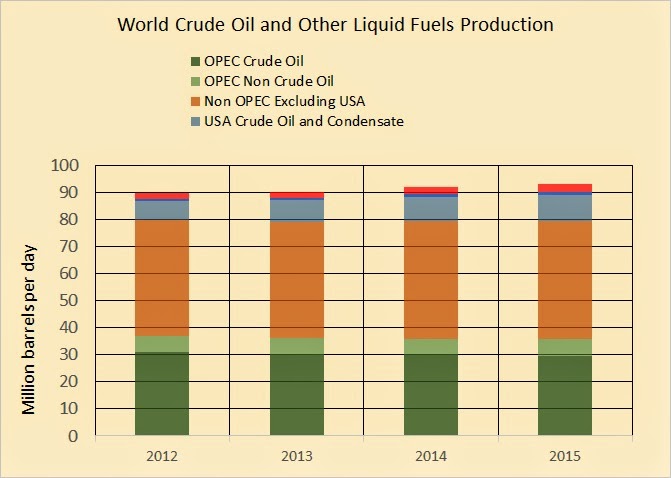 Total world liquids production.  By liquids I mean everything,
including biofuels, all the way to  synthetic oils made from gas.
The red wedge at the top is the ethane+propane+butane extracted from natural gas.

The figure shows world liquids production increases are largely attributable to USA increases. These in turn include a significant fraction of condensates and very light hydrocarbons.

OPEC´s crude oil production seems to have been holding steady at around 30 million barrels per day (about 1/3 of total liquid fuels production). OPEC nations also produce condensates and other liquids, but these aren´t segregated in their reports. This means I can´t figure out which types of “Non crude liquids” they are producing. What I do know is that OPEC non Crude is increasing slightly.

As for the non USA rest of the world, they sum zero growth to a slight decline, as show in this graph, which shows the year to year changes in the various streams: 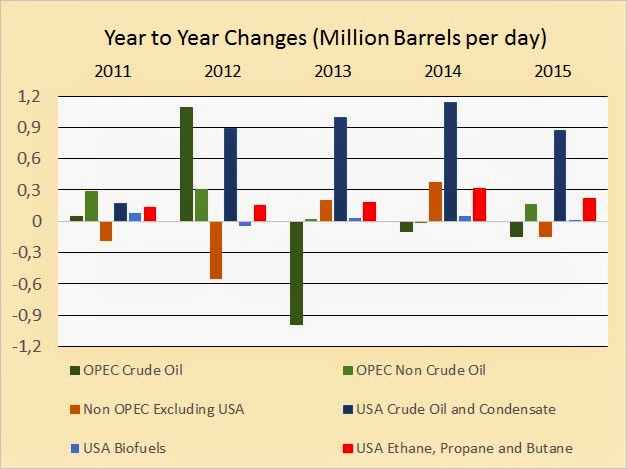 Year to year changes. There´s no  net increase since
2011  for all nations except the USA and OPEC.

If we strip out the biofuels, light hydrocarbons (the ethane, propane and butane family), and the small amounts of synthetic oils made with natural gas feedstock we get the following figure: 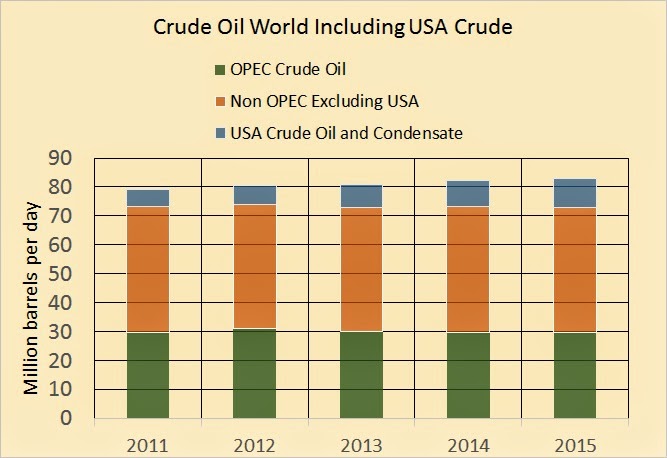 As we can see, the USA is the gorilla when it comes to “real crude oil” production increases. The USA is definitely the cause of the oil price bust.

Note: Within the USA, North Dakota´s Bakeen and Three Forks formation horizontal wells, and the Texas´s Eagle Ford formation condensate are the olympic champions. These zones are called "shales", but the truth is a bit more complex. They should properly be called "very low permeability and rather stiff  light hydrocarbon bearing zones". In other words, these rocks are more a mixture of carbonate, silt, and other low quality rocks with a small amount of shale. This isnt exactly world class rock, and this is why the wells decline extremely fast. 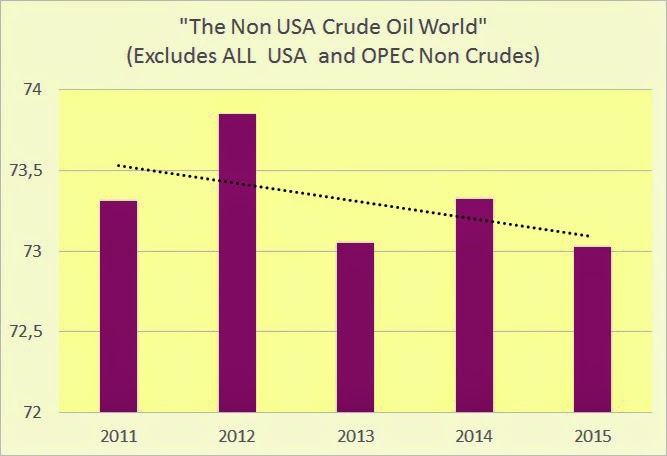 Non USA Crude Oil World (this excludes the
USA and the OPEC non crudes, but includes
biofuels from all nations except the USA).
The black points line is a linear fit.

We haven´t  reached the overall peak, because the condensates, the light oils from fracked shales, and the biofuels (puny as the later are) seem to be filling in the demand gap.

However, most of these non crude oils require prices around $80 to $110 per barrel (or government subsidies such as are given to ethanol). This means the recent price drop will cause a reduction in total world wide production capacity. And this in turn will lead to higher oil prices, which will restart the cycle and encourage the production of the non crude oil liquids as well as the light oils from the fracked shales.

So the million dollar question is, what´s the amount of light oil and condensates we can extract from these fracked shales around the world? The answer: it depends on prices. Conventional crude oil production seems to have reached a plateau, and may indeed have reached a peak (and if it hasn´t it seems about to do it). This means over the medium term we should see gradually increasing prices. What happens after that? When we run out of shales we can drill at a given price range (say $100 to $125 US per barrel) then production drops, prices increase, and this allows drilling and fracking increasingly marginal fields.


But there´s a catch: as the price increases and the industry turns to more and more marginal fields it will put an increasing  load on other resources. This means that,  once we start prices going up that escalator,  oil prices will induce energy efficiency, and if we are lucky an alternative may surge to take up the slack. If nothing shows up that´s truly competitive (sorry to disappoint you, but electric cars fed by wind mills isn´t the answer), then we are going to be riding the bus to work and living much more frugally. And this tells me ought to start focusing on energy efficiency as well as researching and moving towards  reasonable alternatives to crude oil, because (in spite of the recent price drop) we seem to be running out of the stuff.

I keep reading comments in the media about what´s causing the oil price reduction. Demand isn´t dropping, as shown in the following quote from the January 2015 OPEC Monthly Report:

World oil demand growth for 2014 was revised up by 20 tb/d to average0.95 mb/d, bringing total oil demand to 91.15 mb/d. The upward revision was broadly a result of better-than-expected data for OECD America and China in 4Q14.


For 2015, growth is expected to be around 1.15 mb/d, higher by 30 tb/d from the previous month’s report, reaching 92.30 mb/d as result of upward adjustments to oil demand data in OECD America and Other Asia.